Check back here to read updates about the Arts at Hayfield 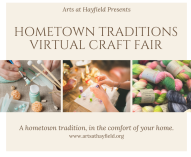 THE SHOW MUST GO ON!

After Arts at Hayfield canceled both of its planned craft shows, volunteers began formulating a plan so the show could go on – with the assistance of a Penn State Wilkes-Barre student who is using her skills to help the event go virtual.

The 2020 Hometown Traditions Virtual Craft Fair launched on September 6 and runs through December 31.

Arts at Hayfield has a long tradition of raising funds to support local arts programs and artists as well as supplying scholarships to Penn State Wilkes-Barre students. However, due to the COVID-19 pandemic and concern for patrons’ safety and well-being, the organization was forced to cancel both the 2020 Summer Arts Festival and Homespun Holiday Craft Show. As an alternative to the live on-campus craft shows, organization volunteers worked together to create a craft fair to promote crafters and vendors. Jonathan Pineno, president; Janis Winter, treasurer; William Bachman, marketing and promotions, and Autumn Resauit, social media, and marketing coordinator, developed the Hometown Traditions Virtual Craft Fair, which pays homage to the history of Arts at Hayfield craft fairs that have been hosted at Penn State Wilkes-Barre for 35 years.

Autumn Resauit worked with Pineno, her mentor, to create a proposal and advertisement pieces for the virtual craft fair. Resauit continues managing the Facebook page, where she creates graphics and develops posts.

“Everything that I know about social media, event promotion and communications is from my Penn State courses,” she said. “Volunteering with Arts at Hayfield has given me the chance to combine my passion for the arts and to apply what I have learned in my courses.”

Resauit also said helping the craft show continue is important to her because as a student herself, she knows how important the scholarships offered at Penn State Wilkes-Barre are. “I’m so passionate about helping Arts at Hayfield because it benefits students. I know that as a student, any help is welcomed,” she said.

Message from the president of Arts at Hayfield - Jonathan Pineno:
We previously announced that the 2020 Summer Arts Festival and the Homespun Holiday Craft Shows are Canceled.
We created a new online alternative platform for promoting Crafters and Vendors and are now accepting applications.  Crafter Applications
The Hometown Traditions Virtual Craft Fair is completely online, through the Arts at Hayfield Facebook page, and offers opportunities for businesses to showcase their work from September 6 to December 31, 2020.
Since we cannot currently offer live tours of the Hayfield House on the campus of Penn State Wilkes-Barre, you may enjoy reading about the historic home. Hayfield Brochure update.pdf
Watch the 1965 video documentary film tour of the Hayfield House and surrounding grounds Narrated by Phil Carlyle. The video, which includes additional information and interviews, was recently posted on our new Arts at Hayfield YouTube Channel. https://www.youtube.com/watch?v=1UYquMqNopE&t=131s
We welcome your comments as we continue to provide content that is related to the Arts at Hayfield's mission of promoting the arts.
Take a virtual tour of some other historic mansions. Mt Vernon - Vernon, VA; Mark Twain House- Hartford CN; Buckingham Palace-London, England; Vizcaya Museum-Miami, FL; and Monticello-Charlottesville, VA. Stay safe and stay healthy!
https://www.southernliving.com/news/virtual-tour-historic-mansions